The delivery of this Airbus’ Mobile General Ground Station (MGGS) constitutes a major milestone for the NATO Alliance Ground Surveillance Force (NAGSF), as being the very first equipment delivered. The MGGS will offer to the NAGSF an unprecedented capability of persistent surveillance, intelligence and reconnaissance over wide areas. 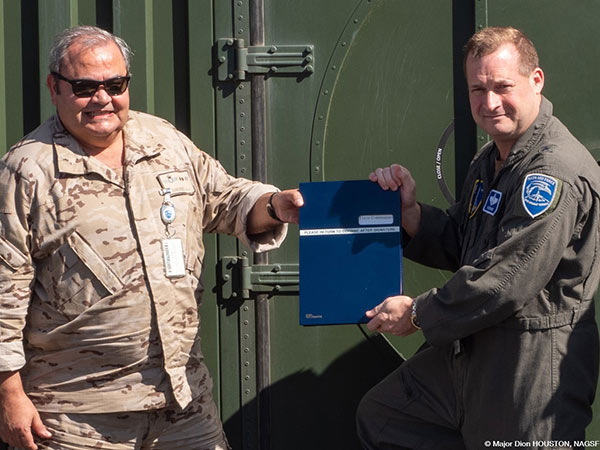 The MGGS is the mobile deployable parts of the AGS Programme that perfectly integrates into shelters and is easy to transport. Thanks to its communication component, it enables the processing and management of radar images received as well as the distribution of Intelligence, Surveillance and Reconnaissance (ISR) data to deployed users, regardless of location or communication infrastructure in-the-field.

“I cannot wait to deploy the MGGS for the first time” said NAGSF Commander Brigadier General Philipp A. Stewart. “It provides the Alliance and NAGSF with the exploitation capabilities we need in the most mobile and flexible packaging for rapid deployments all over the world.”

“We are very proud to contribute to the AGS programme with our knowledge and experience in ISR, and are proud to recognise that the first pieces taken over by NATO are being contributed by Airbus” said Harald Mannheim, Head of Defence Solutions at Airbus, “We are looking forward not only to the acceptance of the other five units in the near future, but also to further developing the programme's capabilities together with the AGS Force and the NATO Support and Procurement Agency (NSPA).”

The AGS industrial team is led by Northrop Grumman and includes Airbus, Leonardo and Kongsberg, as well as leading defence companies from participating nations. The final AGS system will consist of five remotely piloted RQ-4D Global Hawk aircraft, developed and produced by Northrop Grumman as well as six mobile ground stations from Airbus and two transportable ground stations from Leonardo.

Radar images will be acquired by the Global Hawk remotely piloted aircraft and received via a direct or satellite broadband connection. In addition, data from all interoperable Command, Control, Intelligence, Surveillance and Reconnaissance (C2ISR) systems operated by NATO and its member states can be received and evaluated. The exploitation results will provide information about stationary and moving objects on the ground to the local unit’s commander and can be distributed as well within NATO forces.

The first two RQ-4D aircraft arrived in Sigonella, Italy, last December, and a first demonstration flight over the Mediterranean Sea was performed in March. The initial Operational Capability will be achieved during the second quarter of 2020.

All the MGGS units ordered by NATO have already been sent to the Main Operating Base in Sigonella. The five remaining ones will be handed over to the NATO AGS Force during the first half of 2020. Thereafter, the stations will be redeployed to NATO operating units worldwide when required.