The construction of a new motorway connection between the North-Sea harbours in the Netherlands / Belgium and industrial areas in the Rhine-Main region is one of the biggest infrastructure projects currently being implemented in Central Germany. A particularly challenging element of this project is the construction of a highway bridge crossing the Moselle River, the so-called Hochmosel Bridge. The bridge and its connecting roads will be built in landslide-prone areas. In addition to the GNSS measurements implemented by the local authority, Landesbetrieb Mobilität Trier (LBM TR), a second independent measurement campaign was required in order to monitor the dynamics of existing landslides on a vineyard site near Graach, Germany, before and during the construction works. 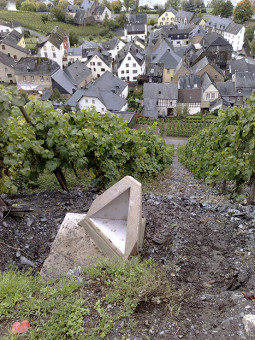 The Geo-Intelligence experts of Airbus Defence and Space tasked the high-resolution TerraSAR-X satellite to regularly record data over the landslide-prone vineyard areas. Thanks to the sensor`s weather independence and frequent revisit capacity, TerraSAR-X is ideally suited for surface movement monitoring. Over 100 TerraSAR-X scenes were acquired over three years. Using radar interferometry techniques the data was analysed and a surface movement map derived.

The vineyards provided an insufficient number of naturally occurring reflectors, especially in the area of the slope affected by the landslide. Therefore, a number of radar corner reflectors were installed to provide additional measurement points.
The surface movement analysis provides detailed insights into the spatial distribution of surface movement as well as the movement velocity.

Furthermore, detailed time series of the corner reflector movements have been delivered for the monitoring period. The comparison of these results with the GNSS measurements showed impressive congruence with respect to both the extent of movement as well as the temporal evolution of the surface movements. 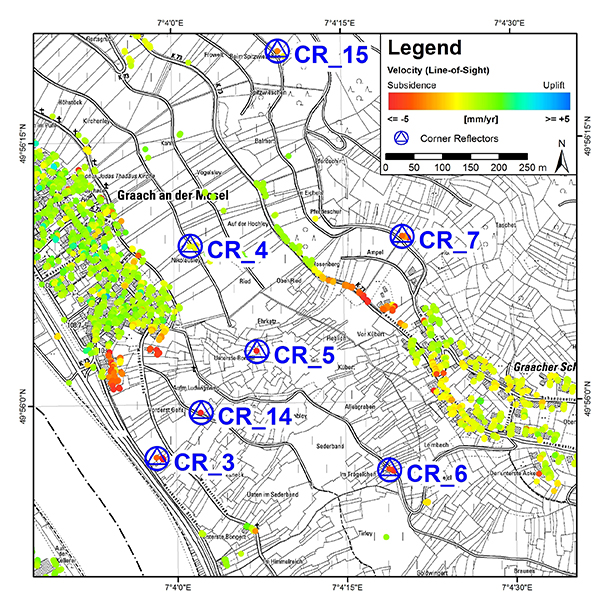 Space-based monitoring of surface movement phenomena using TerraSAR-X data can complement terrestrial measurement programmes and can deliver valuable information for all stages of infrastructure projects, starting from feasibility or design studies through to risk or environmental impact modelling as well as monitoring of ongoing construction activities.