How Satellite Data Can Ensure Safety in Urban Areas

Airbus Defence and Space experts used data acquired by the high-resolution TerraSAR-X satellite to monitor surface movement phenomena in Beijing, China. Significant land subsidence of up to 150mm per year was detected in some parts of the city. 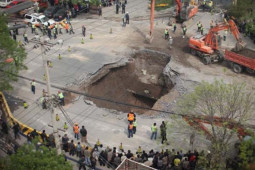 In recent years the occurrence of substantial ground subsidence has become a serious problem in Beijing, China. Statistics provided by the city’s authorities reveal that the over-extraction of underground water caused a drop of the capital’s water table from 12m to 24m in the past 10 years. The ensuing surface subsidence endangers the local population and infrastructure: roads and houses sink and even crack, the safety of subway lines is jeopardised, underground water and gas pipelines are increasingly prone to ruptures.

City Authorities have established a terrestrial surveying program using levelling data and GPS to monitor the subsidence and highlight potential risk areas. However, due to restricted budgets this levelling network can only provide point information about subsidence with sparse spatial density and restricted extent: It does as such not deliver a continuous and sufficiently extended understanding of the entire deformation area.

Airbus Defence and Space experts conducted a monitoring campaign using TerraSAR-X StripMap scenes (3m resolution) of Beijing, acquired over the period of one year. The monitoring was focused on the Eastern part of the city, where the largest subsidence phenomena were reported.

The outcome of the study yielded surface subsidence of up to 150 mm per year (visualised by the orange colour scheme in the graphic).

These results correlated strongly with the levelling results. Additionally the overall subsidence phenomena could be derived: the surface movement extends to a large area, but subsidence distribution is inhomogeneous with parts of very strong horizontal surface displacement gradients.

The latter can be identified as areas with the strongest risk of damages to surface infrastructure due to inhomogeneous stress - valuable information for initialising.

Space-based monitoring of surface movement phenomena using TerraSAR-X data can complement terrestrial measurement programs and can support the city administration with  timely detection of risk to human lives and infrastructure.

TerraSAR-X can subsequently also be utilised to monitor the effects of countermeasures taken by the Beijing authorities. Currently a pipeline is constructed to channel water from the Yangtze River to the capital. Upon completion of the project in 2014 the drawing wells will be closed and part of the water is also intended to be used to replenish the drained ground water and reverse subsidence. The continued monitoring with TerraSAR-X can reveal the success of these countermeasures or help to identify any undesired effects.

How Satellite Data Can Ensure Safety in Urban Areas