Satellites can provide an effective support for relief operations

During summer 2012, torrential rain fell over Africa for weeks, causing  severe flooding of the Niger River at the end of August, with enormous damage caused all along the river. Niamey, Agadez and Dosso were the hardest hit cities. About 485,000 people were affected, many of them were left homeless and 68 people died.

The French Civil Protection activated the International Charter ‘Space and Major Disasters’ (Charter) on the 28 August to help in organizing an evaluation and recognition mission to assess the state of infrastructure (bridge, roads…). As the French member of the Charter, the CNES (French Space Agency) was responsible for the coordination of the different data suppliers and the delivery of information to the end user. Pléiades and TerraSAR-X were part of the Earth Observation satellites selected to cover the event and the SERTIT was the mapping services supplier.

On the 29 August at 13:07, Airbus Defence and Space received a Pléiades tasking request from the CNES. An emergency acquisition was planned by the tasking team with priority over Dosso - where nearly 10, 000 houses were reportedly destroyed – Agadez and Niamey. At 12:16 on the 30 August, less than 24h afterwards, the first Pléiades images were acquired over Dosso and Agadez. Four hours later the data were delivered after pre-processing to SERTIT.

The same day, a TerraSAR-X StripMap scene was also acquired and delivered to SERTIT 24h after request, providing an accurate view of the situation over Niamey, despite the heavy cloud cover. 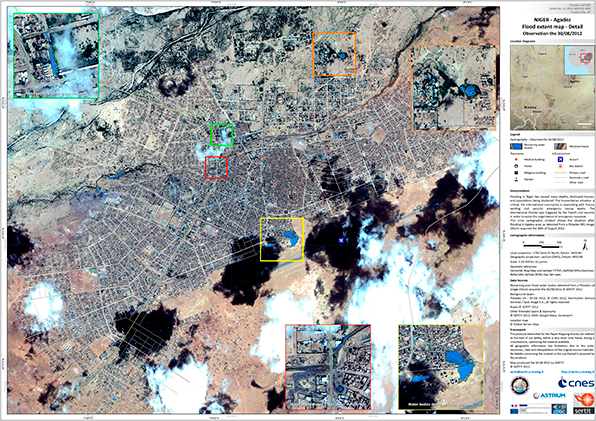 Agadez, Niger
Disaster impact map produced by the SERTIT based on Pléiades, SPOT 5 and TerraSAR-X imagery

The flood extents, plus impacted urban areas, were highlighted and points of interest for emergency services such as hospitals, airports and passable roads were identified on the map with the aim of helping to better organize rescue operations. These accurate damage assessment maps were issued less than 5 hours after image delivery. 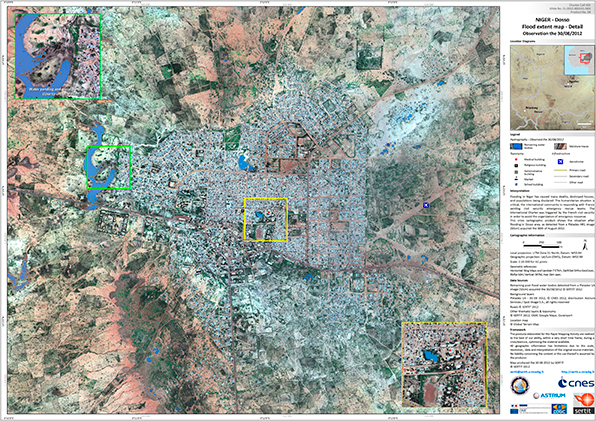 Dosso, Niger
Disaster impact map produced by the SERTIT based on Pléiades, SPOT 5 and TerraSAR-X imagery

A SPOT 5 archive image (as well as other providers’ images) was also delivered to serve as reference imagery, to map other areas and to provide the needed overviews of the affected regions.

Rapid acquisition and weather-independent access to the information: this example, where human lives are at stake, shows how relevant the Airbus Defence and Space Constellation is to rescue operations.

Challenge: Rapid damage assessment and rescue planning support after a natural disaster
Solution: Delivery of new Pléiades and TerraSAR-X images within 24 hours of the request and of a SPOT 5 archive image as a reference layer
Results & benefits: Good knowledge of remaining infrastructure, immediately assisting the work of the rescue teams.

Satellites can provide an effective support for relief operations

The International Charter was created in 1999 at the initiative of the European Space Agency (ESA) and the French Space Agency “Centre National d’Etudes Spatiales (CNES)”.It provides a unified access to satellite data to support reaction to natural or man-made disasters.Each member agency commits resources to support the Charter, contributing to mitigate disaster impacts on human life.The Charter’s aim is to coordinate the 14 space agencies which   collaborate worldwide to task satellites in order to provide imagery for crisis mapping and damage assessment in response to a natural disaster.When the Charter is activated, reactivity is critical as lives are often at stake. This service is available 24/7 at no cost to the end user.

The rapid mapping service of SERTIT, University of Strasbourg, works 24/7/365 and is committed to producing crisis maps less than 6 hours after satellite image reception, allowing decision makers to optimize rescue or logistics in the case of a major event.