Euralis, a based in South-West France, was in search of a solution for its farmers to optimise their production and improve crop yields. It also wanted to support them in the discovery and management of new species. This required regular monitoring of crop lands and reliable agronomic guidelines.

proposed its decision tool for the 2014-2015 crop year and beyond. The aim was to provide with appropriate guidelines to improve management of input and better protect crops from seeding through to Harvest.
This Farmstar campaign resulted in the acquisition of some twenty cloud-free satellite images between December 2014 and May 2015, very easily obtained by the 6/7 satellites thanks to their high agility and daily revisit capability. Their 1.5 metre resolution and 60km swath mean they are excellent assets for farming applications. The agronomic reports supplied on key dates by result from a unique combination of remote sensing and agronomic expertise, and make lighter work for farmers in managing their crops. These guidelines can be imported into mounted modulators to automatically control inputs during spraying. 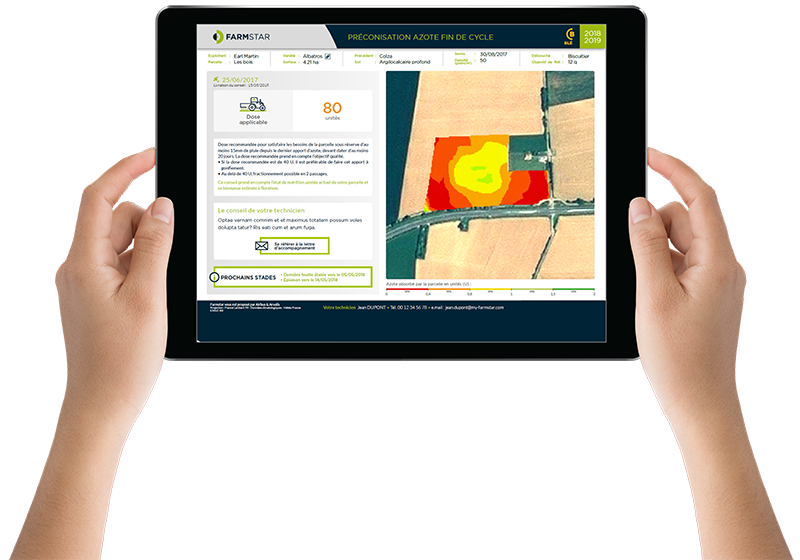 The accuracy and reliability of Farmstar guidelines make it a real Decision Support System (DSS) which can also be used tojustify nitrogen amounts to the authorities. Thanks to Farmstar, Euralis wheat yields have exceeded average local levels by 10-15% (7- 11 quintals per hectare), which represents €145 to €225 of additional revenue per hectare. Similarly, the wheat protein level has increased by 0.8 points from the cooperative’s average level. Finally, savings of 10% on

is a farming cooperative based in Lescar, in the South-West of France

(ex-CETIOM) is a French technical institute responsible for research and development for agriculture.
It specialises in oil and protein crops.